Stillwater Unzipping on the South Coast

The lakes, lagoons, rivers and creeks of the south coast have the potential for numerous kayaking and canoeing experiences. Some take a few hours, others most of a day and one or two could be stretched into overnight trips. I’ve explored Narrawallee Inlet, Termeil Lake, Meroo Lake, Durras Lake, Congo Creek, the Tuross Delta, Whittakers Creek and Lake Brou, an arm of Wallaga Lake, Bournda Lagoon and Saltwater Creek in Ben Boyd National Park. Most of them are enveloped by State Forests or National Parks.

At Narrawallee Inlet, north of Mollymook, the tide was rising, an excellent time to paddle up the creek. In contrast to many other inlets which are often closed for many months and have murky water, this one is replenished by fresh seas every day. I could see glinting fish, submerged logs and weed beds a couple of meters down. I also saw a clearing suitable for a nights camp but changed my mind when, after stopping, I found a big tick under my watchband. I grabbed and squeezed his poisonous head in the nick of time.

A grandfather and grandson were out fishing, he in a kayak with footpedal propulsion and the boy with a normal kayak like mine.

‘I see you’ve got one of those new fangled kayaks?’

‘Yes, I like the footpedals, it keeps my hands free for fishing.’

‘Does the boat leak at all?’

‘No, haven’t had any trouble so far’.

‘Oh, yes, I caught a big flathead just back there, one of the biggest I’ve caught’.

I paddled on and stopped at a farmers fishing hut to make a fire and boil the billy. I felt invited. Someone had scratched USE BUT DON’T ABUSE and PUT FIRE OUT on the red walls. I could have been in a mountain hut. Through a crack I spied a double bunk, a fridge, some deck chairs and tables. Outside was a solid steel container used as a boiler. A farmhouse, Wickham Hill, was just visible in the distance.

On the way home I found a shortcut through a large area of mangroves which would have been high and dry at low tide. Further along a group of energetic teenagers had tied up at a large overhanging tree and climbed onto a high branch. With screeches and squeals they dared each other to jump, and with further screams did. I felt an urge to join them but paddled on to beat the low tide.

To get to a water body without road access, I make the journey easier with an old, but prized, two-wheel cradle. Beautifully engineered and with its own suspension, I inherited it from my parents who used it to move a Klepper folding kayak down to rivers and lakes in northern Germany in the 1930s and 40s. It migrated with us in 1955.

At Termeil Lake in Meroo National Park, the haul to water was about 300 metres. There was no wind and the reflections of tall Spotted Gums were almost too perfect. A dip of the paddle disturbed the surface enough to reveal animated bodies with long slender legs and arms and wild headgear. One of them looked like the full breasted lady of the lake, another was a skinny young nymph, and a third the fierce minotaur-headed monster from the deep. I just had time to compose, set and shoot before the wind chopped my canvas into hundreds of little pieces. It stayed that way for the rest of the day.

Time to paddle over to a large overhanging gum tree and hide in the reeds. The tree is a popular roost for herons and cormorants, a great place from which to spy the next feed as well as socialising, preening and drying. That day there were three stilt-legged herons with long grey overcoats draped over their hunched, world weary shoulders. They craned their necks in all directions except mine, restlessly walked up and down branches as though they were learned judges deciding an important case and finally, after much beak nodding and no fishing, spread their large wings and wafted off to other feeding grounds.

I paddled on and met a lone paddler going the other way.

‘I left my car at the highway bridge and am paddling through to the beach. I hope to get through the surf, paddle around Meroo Head and finish at Bawley Point’.

‘I’ve done it before’, he shouted, and paddled on with gusto.

He was on a surf ski with no food, water or backup. I was awe struck, in fear of his life, impressed by his confidence, but sceptical given the large waves I had seen earlier that morning.

I hugged the shoreline and paddled through a dense, dead thicket of bleached paperbark stems. I wondered what created them. Were they the remains of a long ago village built on stilts? Highly unlikely - the Aborigines didn’t do that. As I threaded through, the keel of the kayak unzipped a film of detritus which closed up behind me as quickly as it opened. The dead end lagoon was full of black swans with teenage offspring. They squealed, shrieked and cried like children fleeing from a disaster but calmed down when they saw me slow down and turn around.

Where the lake narrowed I greeted a kingfisher and waved to a sea eagle. They seem to be on guard at the entrance to every coastal waterway. The kingfisher dived, disappeared under water for a flash, surfaced and took off upstream. The sea eagle stayed regal and unperturbed. Numerous fish broke the glass ceiling and plopped back through it again. Around the next bend a light oil slick and the noise of traffic signalled the highway.

On the way back I met the intrepid ocean traveller. He had made several attempts to get through the surf but been repelled each time. ‘It was too big’, he exclaimed. I was thankful he had returned by the safe route. Alone again, I dreamt up yet another book title: ‘Stillwater Unzipping – Lakes and Rivers of the South Coast’. Dream on Klaus, you never know how long you might live. It’s when you stop dreaming that you’re near the end.

We would love to have your feedback. 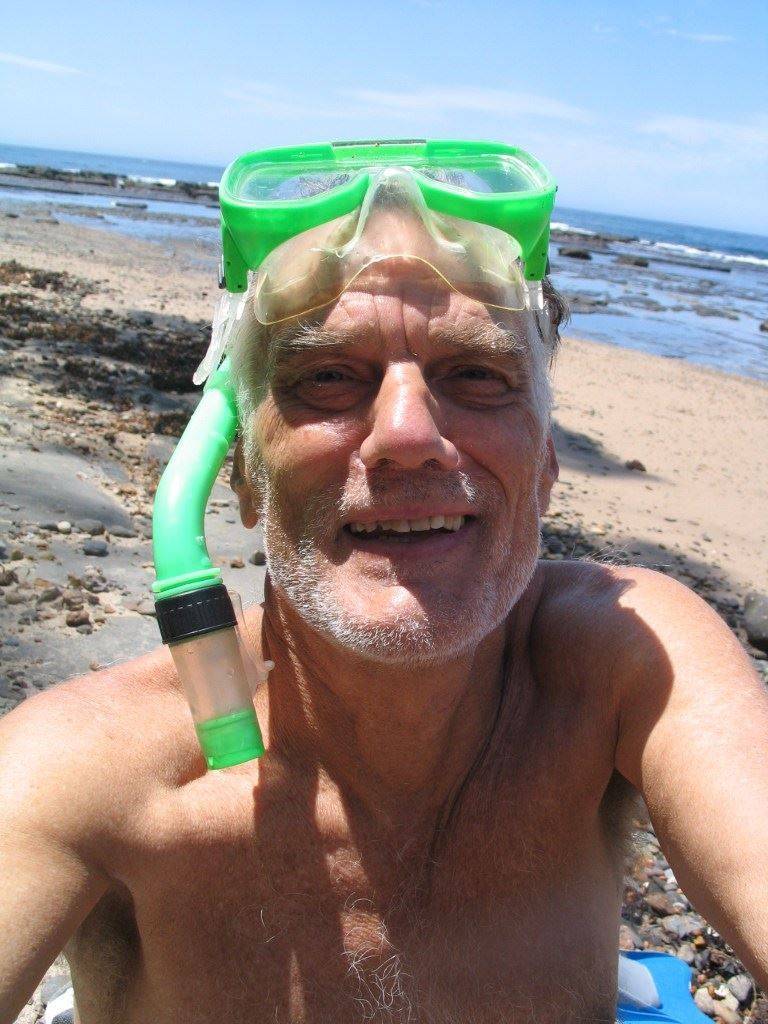